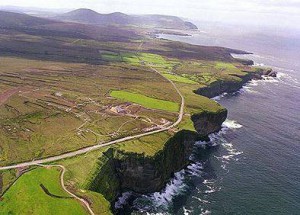 stone-walled fields in the world – dating back nearly 6,000 years.

Céide Fields overlooks the mighty Atlantic Ocean which gently laps or vigorously pounds – depending on the weather! – against the cliffs below. The landscape itself has been forged from the dramatic upheaval and movement of the Earths crust over millions of years.

Beneath the wild boglands of North Mayo lies the Céide Fields, the most extensive Stone Age monument in the world, consisting of field systems, dwelling areas and megalithic tombs. The stone walled fields, extending over thousands of acres are the oldest known in the world. They are covered by a natural blanket bog with its own unique vegetation and wildlife. The Visitor Centre has won several awards, including the Gold Medal for architecture. It is located beside some of the most spectacular cliffs and rock formations in Ireland and a viewing platform is positioned on the edge of the 110m high cliff.

Visitors are advised to wear weather protective clothing and footwear suitable for walking on uneven terrain.

The soil at Céide Fields has been constantly subjected to the conflicts of the weather. The warm Gulf Stream comes up past the American continent between Ireland and Iceland. In the opposite direction, cold deep waters flow south from the icy Arctic Ocean.

This combination of factors has resulted in the wild beauty and uniqueness of this region in County Mayo, Ireland. Location: 8km west of Ballycastle on R314.Guided tours:Max no : 40Duration: 45 minutes – 1 hourFor more information click HERE